Not too long ago, someone posted a question one of the forums I frequent. To me, it felt a little sophomoric but given the political climate today, it also begged an answer. Not simply for the interlocutor, but for all of us. After working up my own answer, it occurred  to me it might be worth sharing here, on my website. For the consideration of anyone who might be interested.

“Can you still say the Republican party is for the wealthy elite, or has the Democratic party equalized or surpassed them?”

Okay, I’m going to try to answer this question without getting pissed. I should warn the overly sensitive this might be a good time to stop reading. I may not be able to pull it off.

Let me start by wondering outloud if I’m the only one who thinks your question misses the salient truth. To that end, I’d like to start with a blinding flash of the obvious.

We’re a nation of 330 million (+/-). We are ethnically, religiously/spiritually, economically & socially diverse. Whether we’re comfortable with that or not is tangential. Personally, I love it, which tips off pretty much everyone with respect to my philosophical leanings, and I’m perfectly comfortable with that. I love that we are diverse and becoming more so every day. That’s a feature rather than a bug, IMO, to being the world’s melting pot.

With that in mind, the notion that any single political party is exactly & only for or about one thing is not simply naïve, it’s guilty of letting all the usual suspects off the hook.

The Republican Tax Cuts and Jobs Act of 2017 was pretty much a giveaway to wealthy, according to the reasonably unbiased news outlets. I’ve chosen NPR to reference here, but there are other centrist publications that agree.

With that said, the American Rescue Plan Act of 2021 isn’t devoid of giveaways to corporate America, either. There’s no question the act has good temporary relief for consumers and those disproportionately affected by SARS CoV-2, including small businesses. But do you think Pfizer, Moderna & J&J aren’t smiling all the way to the bank? And surely you’ve noticed that Amazon, Google & Facebook to name a few, have been making a killing during the pandemic and through both Republican & Democratic administrations have been allowed to function as (highly profitable) de facto monopolies?

Nevertheless, there is a difference

Meanwhile, SARS CoV-2 isn’t done with us & is slowly strangling a lot of small businesses while every Republican house and senate voted against the American Rescue Plan. In the wake of these verifiable truths, the Republican Party and it’s crony “news” outlets continue to obsess over theories relating to exhaustively debunked election fraud, cancel culture and the hypothetical stolen gender of Mr. Potato Head.

Seriously? To the extent these issues dominate our public discourse, aren’t we guilty of chasing butterflies while letting the elephants get away? I’ve just finished taking Republicans to task because it’s so obvious and easy, but boes anyone really think that Democrats aren’t hostage to monied interests? Arguably, Republicans are more flagrant about it. But whether you’re a Democrat or a Republican, if you’re politically active your preferred party cannot get through a day without soliciting $$.

Collectively, we have strayed so far from our best aspirations as a nation that we (all of us) should be ashamed of ourselves. Whether we’re active subscribers to loaded rhetoric & skewed arguments or passive apathists who just let it go out of disgust, we’re to blame. Political parties exist as long as someone supports them, and (obviously) both parties enjoy support in their own constituencies. But in common with most organizations, leadership of political parties co-opt what was once a thoughtful agenda, replacing or adapting it to suit their own ends.

And what have both parties done with their support? We have a bloated (and misdirected) defense budget, legions of lobbyists and a political system awash in so much money, can anyone seriously entertain the notion that either party is on the side of citizens? So as long as we’re partisan Democrats or Republicans, we’re part of the problem, rather than part of the solution. Kind of like this question that originally spawned this rant. It is profoundly devoid of either balance or nuance, not unlike a lot of what passes for political thought, these days.

If we could get back to having substantive policy debates grounded in the verifiable merits (or lack thereof), we’d all have a lot more respect for government and the process we call governance. But that’s just my opinion. What’s yours?

D.B. Sayers is a retired Marine officer, former corporate trainer, training manager and district manager turned  author of four novels with two more on the way. Dirk’s stories are always believable and often evocative. You can be among the first to know when his newest work is due for release by subscribing to Smoke Signals at the top right of this post. 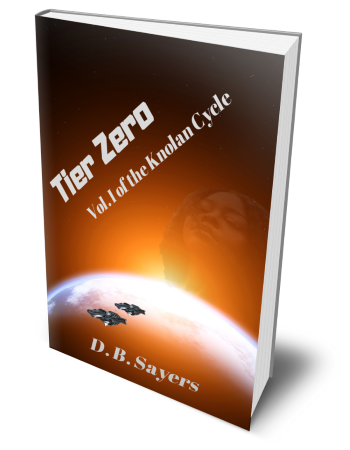 Science fiction tends to tap into our innate curiosity about how the future might affect our lives. One commentator on science fiction as a genre opined that science fiction is “a telescope to the future.” The post makes the case for a forward-looking deep dive into the inevitability of change, driven by man’s relentless drive to control our environment and (by association) our destiny.

I think there’s a place for that kind of thinking, whether you accept the notion in the post or not. Science fiction by definition seeks to deal with the essential unknowns associated with a future that both interacts with us as it unfolds and on which the discoveries we make ultimately have a hand in shaping our destiny. Any speculative fiction shares that efficacy, if efficacy it is.

But I wonder if it’s worth recalling that whatever advances we make technologically, those advances are made by humans. And does not a lot of science fiction get lost in a jungle of “gadgets,” often at the expense of thoughtful thematic expression? Our fascination with a hypothetical future often focuses on how the world in which we live may be transformed by gadgets. But are not humans the real catalysts of change, irrespective of what those changes are? And how that change, whatever it is affects us is only partially dependent on the technology or the practical utility of the latest i-phone app. (For example).

In my view, the real focus of science fiction is and must be on how the changes we bring into being technologically affect not simply how we live, but how those changes transform our lives but how we feel about that brave new world (to parrot Aldous Huxley) and how the changes we both bring into being and by which we are affected, shape our view of ourselves. What makes humans fundamentally different, we believe, is our self-awareness.

It is self-awareness and the degree to which we are able to learn, apply and pass on the lessons we’ve learned that make us who/what we are. And while science fiction gives us an opportunity to play “what if” with technology, I’m not sure that the more important value to be found in reading science fiction is the speculative journey into our own psyche’s and how a different external reality might cause us to order our own lives, both individually and collectively.

In Tier Zero, Vol I of the Knolan Cycle, the Knolans are clearly technologically way ahead of us. So much so, that first contact between the Knolans and we indigenes of Earth actually took place over 30 years ago and no one is aware of it. Yet. In Tier Zero, the Knolans are a little cirumspect about their motivations for making contact in the first place, even with the few with whom they have chosen to connect. And as the reader becomes aware of their reasons for it, it’s obvious that Knolan ideation about a lot of things is fundamentally different than our own. Paradoxically, the Knolans are in many ways so similar to us, that it’s hard to reconcile the differences between their views of themselves and their relationship with the Universe and our own, given how otherwise similar we are.

And that, to me, is the heart and soul of science fiction. It isn’t gadgets, in the end, it’s still about the human condition and how we (as humans) will be affected by world/universal views that are profoundly different from our own. Given our track record here in the US, the supposed melting pot of the world, it’s fair to wonder if our knee-jerk reaction to contact with others, however similar may not be fear, loathing or aggressive antagonism.

When/if confronted with difference from afar, will we have the kind of tolerance balanced with a healthy curiosity to learn from and share with a culture so foreign that it literally dwarfs the challenges of understanding and tolerance we’ve been obliged to confront before? For most of us paying attention, my guess is the jury’s still out. And if you’re like me, that concerns you.

D.B. Sayers is the author of four books and is currently working on two more. In his previous “incarnation,” Dirk was a Marine officer, then corporate trainer and training manager. He currently lives in Laguna Niguel a couple miles from the Pacific with he wife, two psychotic cats and 12 year old, 5 foot Ball Python named Corona.