“Fate hunts us down in our sleep…”

Clay Conover, retired Marine officer turned corporate trainer has successfully re-careered and has a long-term plan. A plan that is grounded in a sense of duty, loyalty and tempered by a healthy dose of realism. Unfortunately,, Clay’s plan does not account for the hiring of Sheera Prasad. Young, hungry and ambitious, Sheera has an agenda all her own.

In the collision of wills that follows, Clay is confronted with a choice that will define him, not simply professionally but personally. Weil he take the ethical high road, or opt for self-serving rationalization? West of Tomorrow is an intelligent romance laced with corporate intrigue, betrayal and crowned by the undiscovered phoenix living in all of us.

“What stood out for me was his [Dirk’s] characters. You can see them, hear them, in some cases, even feel them.” Petra A.
Grab your copy!
“...Dirk Sayers is a polished author who has provided an intelligent and interesting read. There are many books on the market about women reinventing themselves, but the fascination of West of Tomorrow is following this journey from a man’s perspective.” ADV
Grab your copy!
“Sayers’ poignant line...'Only fools confuse the necessary with the good...’ will not soon be forgotten! T. Parvin
Grab your copy!
“An amazing page-turner with strong characters in plausible, compelling situations that can and do happen every day but as the title implies there’s a deeper message.” M. Wright
Grab your copy!
. When your boss is a friend, yet a woman of mystery allures, there will be fireworks. Will they blow up in Clay's face and end his encore career? Turn page after page to learn the truth as told convincingly by this great, emerging writer of fiction. The layers of conflict are astonishing - and compelling! I recommend this book! P.A.
Click Here
Previous
Next

“Isn’t hope in some form our best case scenario?”

More than a year out of college, Nyra’s beginning to wonder when her life gets started. Was it like this for her mother? She doubts it, but things were different, back then. Nyra’s reality is nothing like her mother’s.

Nyra gets that every generation faces its own challenges and she’s smart enough to know that it’s on her to overcome them. That’s why she’s worked two jobs all through college, studied so hard and tried not to worry too much about her mounting student loan debt.

Still, this feeling of wading through wet cement is getting old. Buried somewhere deep in the half-formed jumble of dreams for her future, Nyra hears the siren song of hope whispering to her. She’s so ready. But is the song she hears really hope or just hopeful illusion. Nyra would be lying if she claimed to know.

Fifty (50) percent of all royalties earned through the  sale of Best Case Scenario, print or electronic are donated to Stand Up for Racial Justice.

"follows the main character Nyra's foray into independence as a young woman unsure of which path to follow...peppered with spicy moments. An interesting and enjoyable read. A worthy second offering by Mr. Sayers." S.F.
Grab your copy!
"You hit it out of the park with this one!" VG.
Grab your copy!
“The sex scenes are white-hot. Not clichéd and they go way beyond the physical. The emotion, packed with insecurities and internal dialog left me wanting more.” T. R.
Grab your copy!
“My only complaint is I wanted more. Act I suggests there’s a sequel or two coming? Yes, please!” M. R.
Grab your copy!
Previous
Next

Through the Windshield: Drive-by Lives 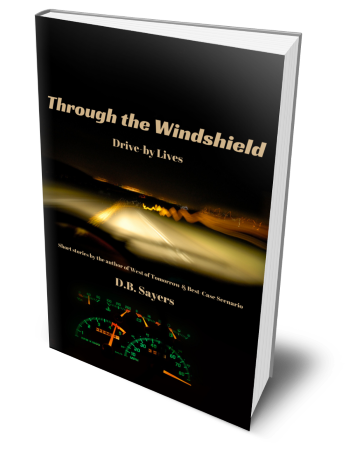 Truth is a shapeshifter. Sometimes it slams into us, in a head-on collision, changing everything in an eyeblink. But more often, change arrives camouflaged in the ordinary, its significance becoming clear only upon reflection.

Sooner or later, we realize that we are at once our own jailers and the instruments of our own freedom, streaking toward a destiny lurking just beyond our headlights.

This anthology is a collection of Dirk’s short stories, some previously published, others released for the first time in this volume. Other stories are adapted from his longer fiction, as a kind of introduction to first-time readers.

"This collection of short stories is delightful. The mood and manner in which he tells different stories are engaging. A must-read...!" OBE
Grab your copy!
"...many of the topics are thought-provoking. If you want to read stories with a message, I think you'll enjoy." DS
Grab your copy!
"Diversity of voice and the ability to draw the reader in are in my opinion, the mark of a fine writer. Mr. Sayers displays both in his latest offering." ADV
Grab your copy!
Previous
Next

Tier Zero, Vol. I of the Knolan Cycle

Two bedrock articles of faith woven into much of science fiction writing chronicling hypothetical  first contact between Earth and aliens are that we will necessarily know when it happens and that alien motives for that contact are likely to be malevolent.

In Tier Zero, Volume I of the Knolan Cycle, first contact between Earth and Knola happened over 30 years ago. For an even so profoundly impactful, it seems strange that the event has escaped everyone’s notice. But that’s what’s happened and life on Earth (or Kurrithaal as the Knolans call it) goes on in apparent blissful ignorance that anything significant has taken place.

As for Knolan motives in making contact in the first place? Let’s just say its…complicated. 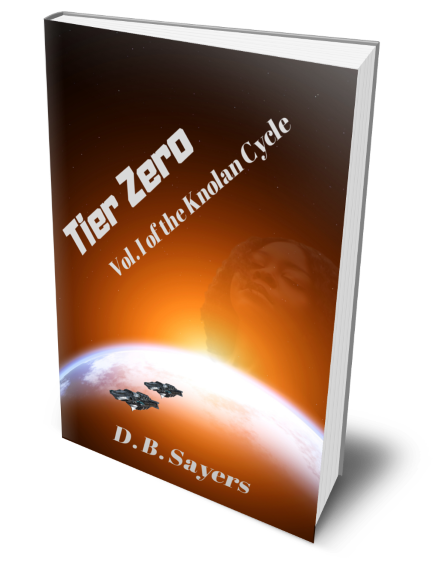 Eryinath-5, The Dancer Nebula, Vol. II of the Knolan Cycle

“The Universe is rarely respectful of our plans.” Khuurus, First Guardian of Knola

Couldn't put it down!
"Couldn’t put it down! A good science fiction writer has the ability to take you there and evoke emotions using characters and worlds that feel believable. This book manages this with a page turning urgency that makes it hard to put down. Entertaining and thought provoking." SF.
Grab your copy!
He has me hooked!
"This book was a journey of discovery, humor, love and fierce anticipation. I couldn’t put it down and I actually fell in Both love and Hate with the characters. Mr. "Sayers goes outside the box of what the concept of the extra terrestrial . He has me hooked, I Closed the book excited to read the sequel! Read it, you’ll be stuck!" M. Smithe
Grab your copy!
An absorbing tale
“...In Tier Zero, the first book of a trilogy, D. B. Sayers is inventive in his world-building and intricate in his assembly of characters in that world... Tier Zero has a vibrant troop of exciting actors, including the main protagonist. He, Marty, is a typical college student who is initiated into an alien world, a world in which he learns and grows to be a hero...an absorbing tale." R. Morgan.
Grab your copy!
Help! Now I'm hooked on Sci Fi!
"Oh my God this one took me by surprise. Now I’m hooked on scifi! A lot of steamy sex in this story but like the other book of Sayers’ I read, there’s deeper meaning. I saw on his website that he’s already finished book two. I’m really looking forward to its release. " Indie Reviewer
Grab your copy!
Previous
Next 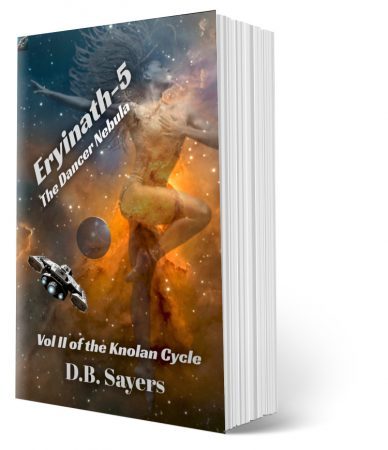 After returning from a successful mission with the Knolan Shock Forces, Hāthar needs a break. With Arra his mate pregnant and he still recovering from his last mission, Hāthar has compelling reasons for sticking close to home. But newly developed stealth technology has enabled Knola’s enemies the Valdrōsians to ambush one of Knola’s Deep Space Fleets, inflicting heavy losses.

Intelligence has identified the facility from which the new technology originated. Developing countermeasures, however, will require a raid to steal the technology and abduct the stealth project managers. Having recently defeated just such a raid, Hāthar is asked to evaluate the feasibility of the Knolan plan.

The plan is insanely risky, but Hāthar senses he is the best choice to lead it. With the fate of his adoptive home hinging on the success of the mission, he sets aside his personal preferences in favor of duty. Eryinath-5, The Dancer Nebula continues the chronicle of Knola’s thousand-year war with the Valdrōsians—and the coming climactic clash that will determine the fate of Earth and our corner of the galaxy.

I really enjoyed this read! I thought it was very engaging once it got started, I couldn't put it down. I liked how the writer made me feel like I was part of this new world and a part of the story. The characters became real, the world became real! Vivid.” Indie Express. 12/15/2021
Get your copy today!
“Sayers has written an excellent book. Science Fiction, action, and outstanding character development. Sayers managed to bring all the characters to life while creating a world true to sci-fi. The plot has a steady pace, keeping your attention and resulting in explosive culmination.” On a Reading Bender 12/9/2021
Get your copy today!
“D.B. Sayers has whipped up an action filled story in a wonderfully vivid world. Great imagination by the author and great world-building. While it is fast, fun and full of action, you can’t help but wish for it to be longer because you don’t want it to end.” Novel News Network 12/21/2021
Get your copy today!
Previous
Next